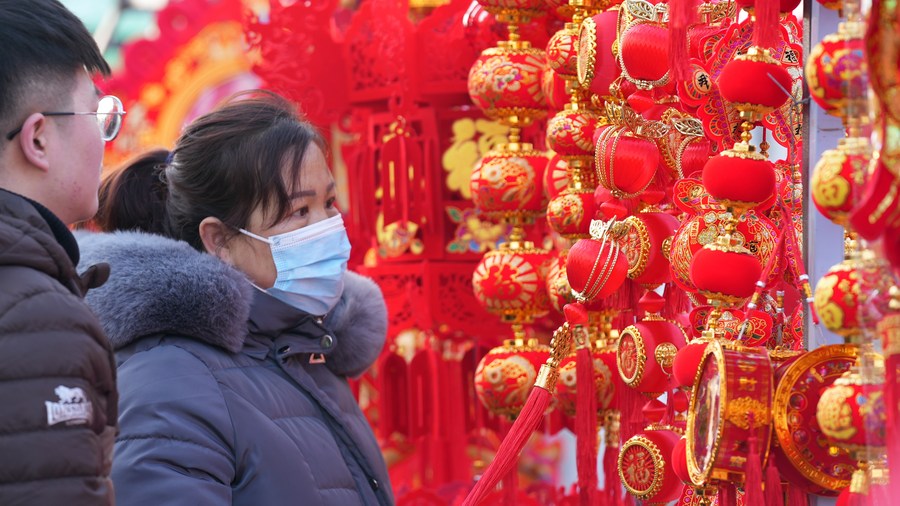 YINCHUAN, Feb. 9 (Xinhua)-- As a Pakistani son-in-law in China, Murad Haider, 36, is quite familiar with the Spring Festival as he spent this Lunar New Year's Eve just like before: watching the Spring Festival Gala, making dumplings and enjoying a family reunion dinner.

"I made dumplings quite well, and it's fantastic for family members to build stronger family ties during the family reunion dinner," said Haider.

Murad comes from northeast Pakistan's Rawalpindi, a city near the capital Islamabad. He has lived in Yinchuan, the capital city of northwest China's Ningxia Hui Autonomous Region, for about 15 years since he came to Ningxia University for Chinese language learning in 2007.

After obtaining his master's degree, Haider also harvested his sweet love for this foreign country and got married to a Ningxia local in 2013.

As a centuries-long tradition in China, the Spring Festival, also known as Chinese Lunar New Year, is a significant occasion for family reunions. Haider, deeply influenced by the traditional Chinese culture, used to travel back to Pakistan with his wife and 7-year-old daughter during the festival, and he would do the same this year if it were not for the pandemic.

"I haven't reunited with my family in Pakistan for two years," said the man. "I miss them, but I'm not lonely at all, because I have family and friends in Ningxia too."

Just like Murad Haider, Nawaz Shah, hailing from northwest Pakistan's Malakand, is another China hand. He has been studying and living in China for 11 years and is now a postgraduate student at Ningxia Medical University.

Nawaz Shah has been to over 20 cities across China. He visited Harbin Ice-Snow World and was impressed with the vivid ice sculptures. He also traveled to south China's Hainan Province for a trip which he described as "entering warm spring after a three-hour flight in a thick down jacket."

He is quite familiar with China, as well as the Spring Festival. Nawaz Shah recalled the big surprise of receiving a red packet when he was invited to a friend's home in a village of central China's Henan Province.

"I know the Chinese elders would give the young generation lucky money or red packets during the festival, but I hadn't expected I could have one," said Nawaz Shah. "I felt touched and would never forget the day."

Zafar Iqbal, a Pakistani expert in Ningxia Academy of Agricultural and Forestry Sciences, was also impressed about the big day for the Chinese. Because of the pandemic, he also chose to stay in China during the Spring Festival holiday.

"I have experienced and witnessed many spring festivals during my stay in Ningxia. During the festival, people would exchange gifts, give red packets, visit friends and spend a joyful time with family members," said Iqbal.

Having worked in many places in Europe, Africa and Asia, he still likes China's Ningxia best. "Ningxia has a beautiful landscape, spanning from wetlands to mountains, rivers to deserts, green fields to well established and well planned city centers. Everything looks to me like a wonderland."

This year, Iqbal spent the festival with his Chinese friends, enjoying pleasant chat time just like their family members.

In order to help the foreigners enrich their holiday life, the regional government of Ningxia has organized a series of celebration activities, inviting foreign experts to experience traditional Chinese art including paper-cutting and ink painting.

"I experienced paper cutting this year, it feels to me like a wonderful piece of art which I experienced for the first time in my life," said Zafar Iqbal. "I also tried to hold the pen and write the Chinese characters, and to play traditional Chinese music instruments. That was so much fun."

Along with the celebrations, the Pakistanis didn't forget to make new year's wishes. Zafar Iqbal hopes that the pandemic could go away so that he could go back to Pakistan for a family reunion, while Nawaz Shah wishes he could be like a tiger with a stronger body and will, and achieve academic excellence.

"I hope my families could live a happy life, and wish them good health and wealth," smiled Murad Haider.