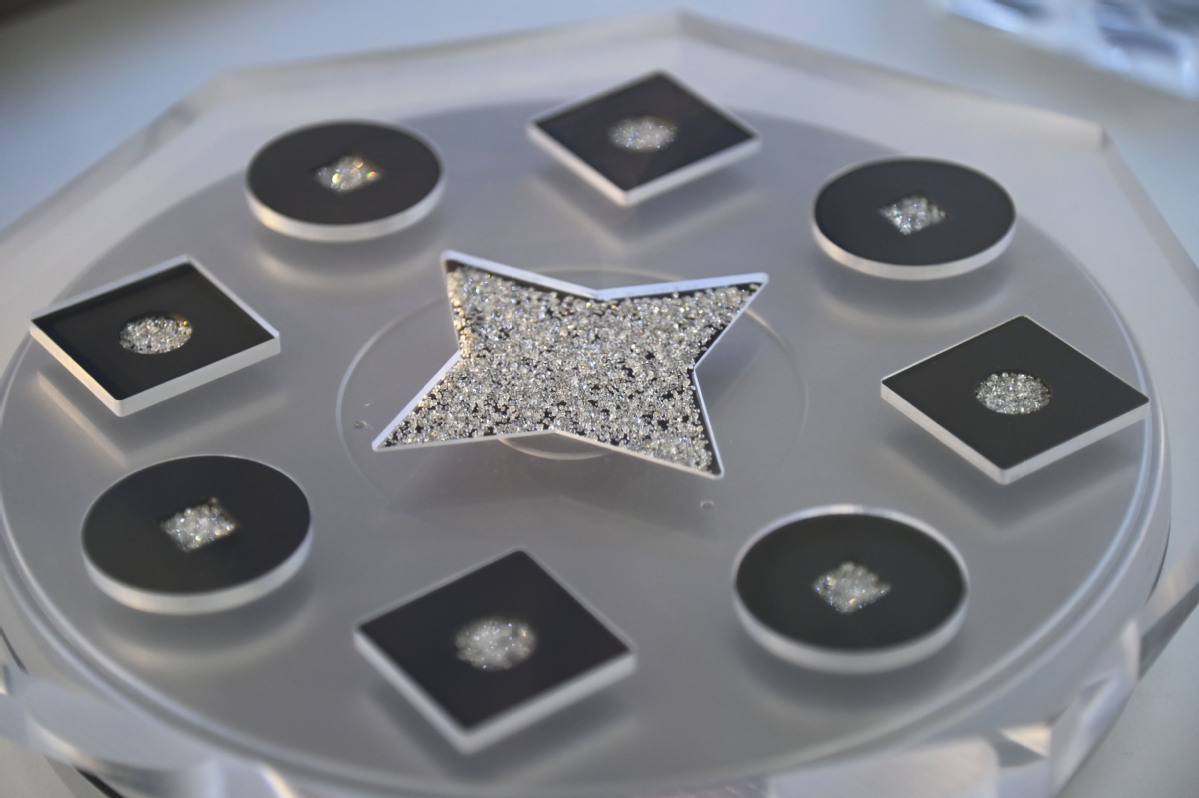 Zhecheng, a small city in Henan province, is often called China's diamond capital, even though the province doesn't have any natural diamond deposits.

That's because of industrial clusters that manufacture and process artificially cultivated diamonds.

For more than 40 years, the processing of super-hard materials has been a traditional pillar industry in Zhecheng. In recent years, the city has further developed its lab-grown diamond manufacturing sector, fueled by a strong demand for diamond jewelry from Chinese consumers.

The annual worldwide output of jewelry-grade rough diamonds from labs is about 6 million carats to 7 million carats. Of that, China's production capacity is around 3 million carats annually－about half of the total. In China, 80 percent of lab-grown diamonds are made in Henan province, consultancy Bain &Co said. A carat is equal to one-fifth of a gram.

With the declining volume of natural diamonds available, lab-grown diamonds are shaking up the world of fine jewelry. Synthetic diamonds, which are cheaper to produce, are proving an attractive choice for millennial consumers. Manufacturing the synthetic version also produces fewer carbon emissions than the mining of natural diamonds, making them more environmentally friendly, experts said.

In China, diamond rings are in high demand among Chinese couples' engagements. Diamond jewelry such as necklaces and bracelets also remains popular, especially as a greater variety of stylish designs has emerged.

Given the scarcity of natural diamond deposits in China, most of which are not of high enough quality for use in jewelry, the country has been relying almost completely on importing natural rough diamonds. At the same time, Henan is providing an alternative option with artificially produced diamonds.

Lab-grown diamonds are synthesized by artificially simulating the crystallization conditions and growth environment of natural diamonds. They are like natural diamonds in composition and in their physical, chemical and optical properties, but are essentially different from zircon and moissanite, which are two other hard gemstones.

Zhecheng's production of diamond micron powder－an ultra-fine abrasive made with artificial diamonds used for grinding and polishing hard materials like gemstones－makes up 70 percent of the nation's output and 50 percent of export volume of the substance, according to the local government.

Zhecheng's industrial park for super-hard materials manufacturing is occupied by some 60 companies involved in related businesses. The city plans in the next three to five years to raise the value of its processing of those materials to more than 50 billion yuan ($7.9 billion) and build an industrial cluster with advanced technologies, according to the local government.

"Lab-grown diamonds possess all of the essential qualities of natural diamonds, only their origin is a laboratory instead of earth," said Zhu Guangyu, a senior analyst of the diamond industry.

"The formation cycle of natural diamonds can require hundreds of millions of years, while it only takes a week or a few weeks to cultivate lab-grown diamonds, giving the products a huge advantage in cost," Zhu said.

In 2020, the penetration rate of lab-grown diamonds in the jewelry market was only 6 percent around the world, and 94 percent of jewelers still used natural diamonds as their primary material, indicating significant room for further growth of synthetic diamonds, the consultancy said.

Henan Liliang Diamond, a manufacturer of premium synthetic diamonds in China, invested 3.8 billion yuan in building its factory in Zhecheng. The company went public on the Shenzhen Stock Exchange in September, becoming the fourth listed lab-grown diamond maker in Henan. It has seen its business boom, market watchers said.

On Sept 24, the first day of trading of Liliang Diamond, its shares opened with an issue price of 20.62 yuan per share, and closed at 229.38 yuan per share, some 11 times higher than the opening price.

The technological development of lab-grown diamond manufacturing has made big strides in terms of equipment and methodology. Diamonds were first grown in laboratories using High Pressure High Temperature systems that used extreme heat and high pressure and a small bit of diamond "seed" to grow graphite into diamonds. A new way to grow diamonds is chemical vapor deposition, in which a seed is sealed in a chamber with carbon-rich gas and heated to high temperatures.

Liliang Diamond said the weight of a single portion of the lab-grown diamonds it produces could exceed 30 carats, which is a sign of the innovation ability of the company. The manufacturer, together with others, has also been working with colleges and scientific institutions such as Zhengzhou University, Jilin University, Henan University of Technology and the Chinese Mechanical Engineering Society.

"The company possesses five core technologies it has developed, which have helped it to form a strong market-leading advantage. The market potential of synthetic diamonds is remarkable, and the penetration rate of the product in China is expected to grow rapidly," said a research report by Soochow Securities.

Chinese synthetic diamond manufacturers, however, can produce large quantities of semifinished diamonds of between three and six carats, which can then be made into diamonds for jewelry of one to two carats. By 2025, the output of semifinished, lab-grown diamonds worldwide is expected to reach 18 million carats, representing a market of 38 billion yuan, according to a research report by Guosen Securities.