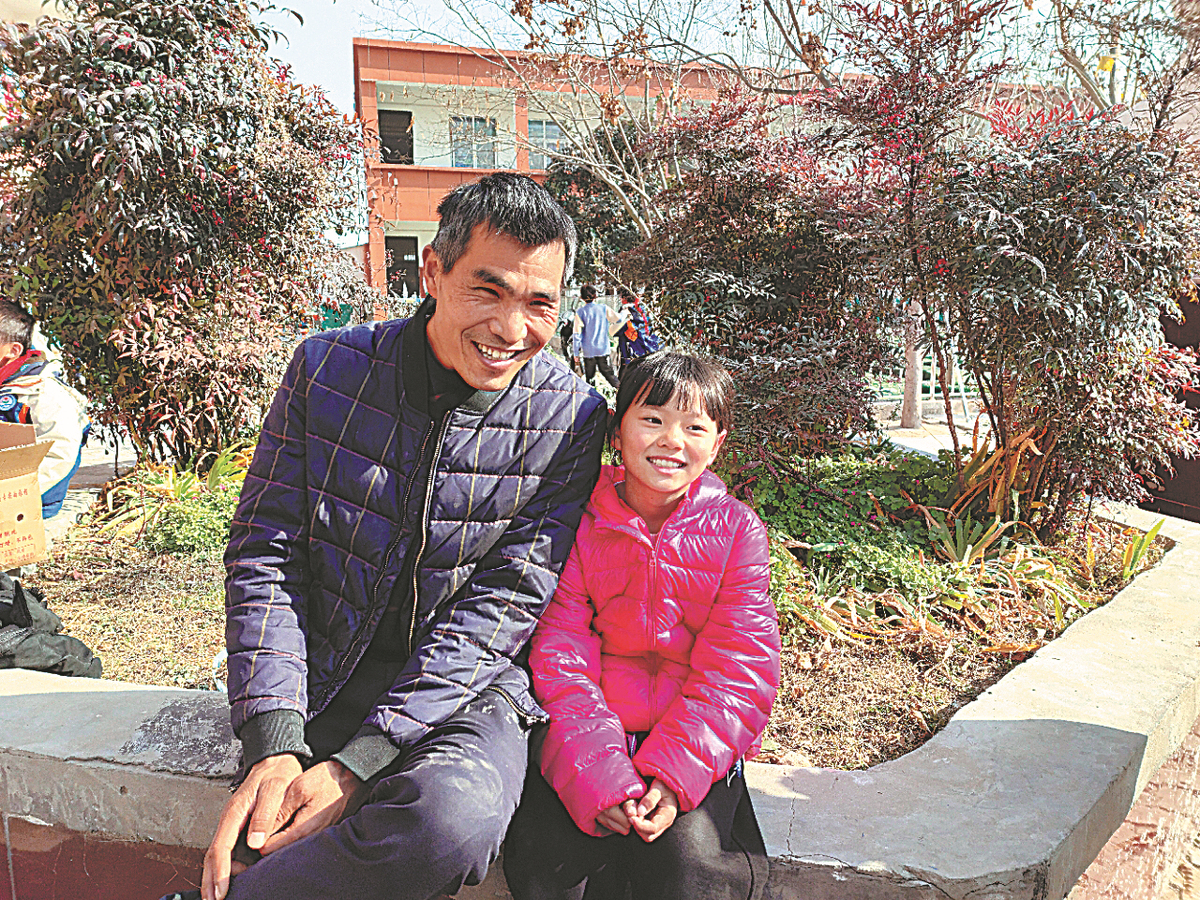 Zhang Pengcheng and one of his students at Erlangmiao Primary School in Taikang county, Henan province. [Photo/CHINA DAILY]

Zhang Pengcheng's hair is silvery even though he is only 39 years old.

The principal of Erlangmiao Primary School in Taikang county, Henan province, is also a star on Douyin, the Chinese version of TikTok, where he has 1.79 million fans.

Since 2019, Zhang has been uploading videos about the children at his school, stories of their everyday life, including what they eat, under the account name "Pengcheng Principal".

"I wanted to record all this so parents who work in big cities far away can see what their children are doing," Zhang said.

Most school-age children in Erlangmiao live with their grandparents.

Born in Erlangmiao village in 1982, Zhang was also a migrant worker before returning to Henan to be a teacher in 2012.

In 2018, he volunteered to be principal of Erlangmiao, a school with just 20 students that was about to be merged with other schools.

"My first thought was how to keep this school. The facilities were poor, so my main task was to improve everything and then look for more teachers," Zhang said. "I remember we had serious leaking whenever it rained. In fact, the school had to shut down when there was heavy rain or snow. There was no playground, and the electronic devices in the classrooms were broken."

To upgrade the school, Zhang spent 140,000 yuan ($22,000) of his own savings and borrowed money from relatives before education authorities were able to help.

To keep renovation costs down, Zhang, his staff and some of the students' parents painted the school's walls and got the grounds in order.

Once those improvements had been made, he switched his focus to the students' academic and psychological needs.

Two or three days a week, he would get up as early as 3 am to buy fresh vegetables and meat for the children.

To ensure the food was of sufficient quality, he added some of his own money to the budget.

"For children here, things can be tough. They lack mental stimulation and companionship, in particular," he said.

One girl, who disliked playing with the other children, caught his attention. She didn't speak much and showed little interest in studying. Zhang said he realized she was from a single-parent family because the only person she talked about was her mother.

"Children tend to avoid direct discussion over the problems. So I asked some of the others to play with her, which made her more outgoing. Then, she not only came to enjoy school, but also played with the other children more readily," he said.

"Over the years, my ideas on education have evolved. At first, I thought grades and enrollment were important, but now I think educating the inner self is more fundamental. I hope that when these children eventually become part of society, they will have the ability to work, to communicate and to manage their emotional ups and downs."

In that vein, Zhang is less a teacher than a father-figure, who cares for the children's physical and mental well-being.

He organizes activities such as tours to museums and historical sites to nurture students' patriotism and the spirit of contributing to society. "You don't have to be a scientist or a business person to contribute to society," he said. "Ordinary people can step up when those around them are in need."

Rural education is not easy, but it has the backing of the government and the public, Zhang said.

"Through social media, more people know what is going on here, and we're even receiving donations from companies. Our resources have improved, and we now have more teachers."

In September, a touching video of an Erlangmiao Primary School student who wanted to save shrimp from her school lunch so she could take them home to her sick mother received widespread attention on the internet.

"My aim is to give love to these students and to teach them how to love," Zhang said.

Qi Xincontributed to this story.